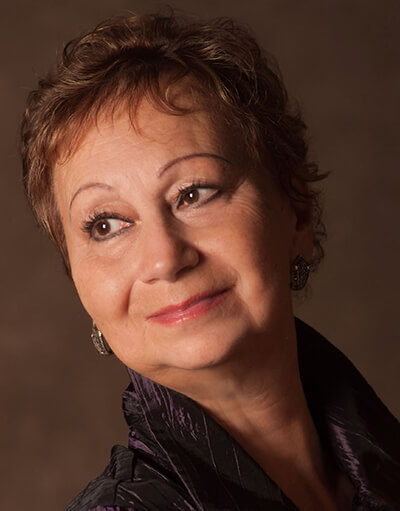 A native of St. Petersburg, Russia, Zhanna Dubrovskaya trained at the famed Vaganova Ballet Academy and graduated with honors in 1968. She studied with the renowned O. Yordan and V. Kostrovitskaya. For more than 20 years, Madame Dubrovskaya was a soloist with the Choreographic Miniatures Company, led by L. Yacobson, and the Maly Theatre of Opera and Ballet (St. Petersburg State Ballet). She has worked with internationally acclaimed choreographers such as L. Yacobson, I. Belsky, N. Boyarchikov, O. Vinogradov and B. Eifman. She has performed throughout the world, extensively in Europe and Asia, and is an accomplished ballerina with recognition in classical, contemporary, modern and character ballets such as Swan Lake, Paquita, La Corsaire, Giselle, La Sylphide, Les Sylphides, Coppelia, La Fille Mal Gardee, The Nutcracker, Romeo and Juliet, Macbeth, The Hooligans, Serenade and Theme and Variations.  Madame Dubrovskaya holds a master’s degree in teaching, coaching and choreographing from the St. Petersburg Ballet Academy. Her US experience began in 1991 at the Colorado Ballet Academy and Company as a Principal Teacher and Ballet Mistress. In 1998, she assumed the position of Artistic Director of the Salt Creek Ballet School and Company, where she continues to enrich the dance community throughout Chicago.  She has been invited as a master teacher and choreographer to stage classical ballets such as Giselle, La Sylphide, The Sleeping Beauty, Don Quixote, Paquita, and Swan Lake for major companies and competitions throughout the US and Europe.  Her students have received numerous awards at the Prix de Lausanne, the New York International Ballet Competition, the Helsinki Ballet Competition in Finland, the Youth America Grand Prix and many others. In June 2006, Ms. Dubrovskaya was invited to participate as a judge at the USA International Ballet Competition in Jackson, Mississippi. She is internationally respected for her preservation of the purity, musicality and aesthetics of the Russian classical ballet technique and traditions. Today, her students perform worldwide in major dance companies.