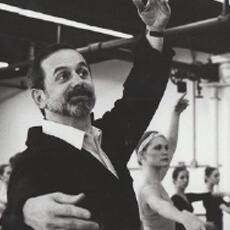 Robert Joffrey, co-founder of The Joffrey Ballet, is being remembered at the 2018 USA International Ballet Competition. Joffrey was instrumental in the launch of the first IBC in Jackson in 1979 and chaired the juries for the first three Jackson competitions.

Representatives of the Gerald Arpino and Robert Joffrey Foundation will present a panel discussion on Joffrey at 10 a.m. Monday, June 18, in the 3rd Floor Theatre of the Jackson Convention Complex. Speakers include Charthel Estner, Trinette Singleton, and Nicole Duffy Robertson. Ashley Wheater, artistic director of the Joffrey Ballet, will moderate.

Charthel Arthur Estner began her dance training in Pasadena, California, and also had one year of classes with Mme. Bronislava Nijinska. She went to New York after high school and was given a full scholarship to the Joffrey Ballet School, soon becoming a member of the Joffrey Ballet. She performed with the company for 13 years as a principal dancer touring the United States, Russia, Canada, London and Vienna. She performed twice at the White House. During her years with the Joffrey she created roles and performed in the works of Joffrey and Arpino, Balanchine, Robbins, Ashton, Tudor, Jooss, DeMille, Ailey, Massine, and Fokine, among others. She, her husband, and son moved to Grand Rapids, Michigan, to establish a professional ballet school in 1983. The School of the Grand Rapids Ballet has produced dancers that have gone on to major companies throughout the United States. As artist director of the Grand Rapids Ballet for 10 years, Estner raised the level of the company from a small civic group to a professional ballet company. Robert Joffrey asked her to join him to instruct at his Joffrey Workshop in San Antonio, Texas, where she taught each summer from 1981 until 1992. She rejoined the Joffrey Ballet as a ballet master in 1998 and can be seen in the 2003 Robert Altman feature film “The Company,” as well as the 2012 documentary “Joffrey, Mavericks of American Dance.” Retiring from the Joffrey Ballet in 2011, she continues to guest teach and stage Arpino and Joffrey ballets throughout the world. Currently she is Executive Director of The Gerald Arpino Foundation, the licensor of the two men’s works.

Trinette Singleton began her professional career with New York’s Joffrey Ballet in 1965.  Upon graduating from high school, she attended The Joffrey Ballet School, NYC, on full scholarship. She joined the company a year later and toured the U.S, Canada, Mexico, and Europe, performing in ballets by notable choreographers such as Joffrey, Arpino, Ashton, Balanchine, Cranko, DeMille, Jooss, Tharp, and Tudor. She has performed at the White House for two presidents and King Olaf of Norway. She appeared on Broadway with The Joffrey as part of Nureyev and Friends, Tribute to Diaghelev. She was thrust into national prominence in 1967, appearing in the multi-media ballet, Astarte, created on her by her mentor, Robert Joffrey. She was the first American dancer to appear on the cover of Time magazine.Following her performing years, she was administrative assistant to Robert Joffrey and Ballet Mistress for the company, 1979-1984.  After the birth of her daughter in 1984, she joined the faculty of The Joffrey Ballet School, NYC, teaching until 2004. In 2002, she restaged Astarte for the Joffrey Ballet, Chicago. Currently, Singleton is Co-Artistic Director of Repertory Dance Theatre in Allentown, Pennsylvania. She is on the faculty at DeSales University, Center Valley, Pennsylvania, where she teaches ballet, pointe and partnering technique, as well as directing the Conservatory of Dance. For the past 15 years, she has been on the faculty of The Joffrey Texas Workshop in San Antonio, set up by Robert Joffrey 40 years ago. Singleton serves on the Advisory Board for Cecchetti USA, and is frequently a guest Master Teacher at their seminars. She is an honorary member of Cecchetti International Classical Ballet. In 2010, she was appointed to the Board of Directors for the Gerald Arpino Foundation, a position she continues in. She holds her Licentiate, Imperial Society of Teachers of Dance, London, England, and her Doctor of Fine Arts, Honoris Causa, DeSales University.

Nicole Duffy Robertson is a co-founder and Associate Artistic Director of the New York Dance Project. She danced with the Joffrey Ballet for over a decade, based both in New York and Chicago, performing works by Joffrey, Arpino, Ashton, Balanchine, Cranko, DeMille, Limon, Massine, and Nijinska, among many others. She is a répétiteur for The Gerald Arpino Foundation, most recently staging Arpino’s Light Rain and assisting Trinette Singleton in the reconstruction of Robert Joffrey’s Gamelan. She teaches nationally and internationally, and is on the faculty of the Ballet Hispanico School, Marymount Manhattan College, and a guest teacher at STEPS on Broadway. Duffy was raised in Puerto Rico, where she began her training with Ana Garcia and Maria Carrera at Ballets de San Juan, dancing the classical repertory. She has a B.A. in Art History from Columbia University, and is a master’s candidate at New York University’s Gallatin School. Her writing has been published in The Massachussetts Review, Eye on Dance and the Arts, and the NYU journal Esferas.

Ashley Wheater was born in Scotland and raised in England, where he trained at The Royal Ballet School. Wheater began his professional career with The Royal Ballet and danced at the London Festival Ballet, The Australian Ballet, The Joffrey Ballet, and San Francisco Ballet. In 1997, he became Ballet Master at San Francisco Ballet, and in 2002, Assistant to the Artistic Director. In 2007, Wheater was appointed Artistic Director of The Joffrey Ballet. New work is the life blood of a company, and he has introduced numerous premieres to the repertoire. In 2008, the Boeing Corporation recognized his commitment to community outreach and diversity in the world of dance, presenting him the “Game Changer” award.  In 2010, Wheater, representing The Joffrey Ballet, was named Lincoln Academy Laureate, the highest honor presented by the State of Illinois.  The Chicago Tribune selected Wheater as 2013 “Chicagoan of the Year” for his contributions to dance. In 2014, Wheater accepted the Chicago Spirit of Innovation Award for The Joffrey Ballet and in 2015, he received the University of Chicago Rosenberger Medal for Outstanding Achievement in the Creative and Performing Arts. He also serves as the Artistic Director of the Joffrey Academy of Dance, the Official School of The Joffrey Ballet.