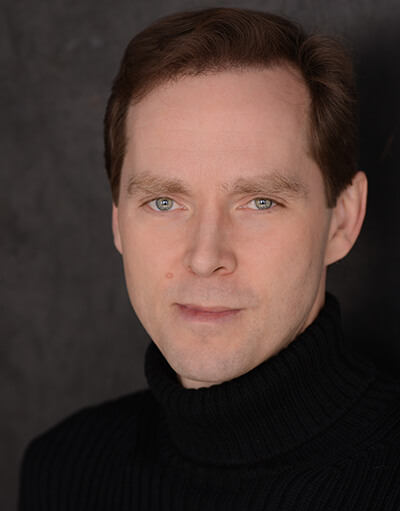 Charles Askegard was born in Minneapolis, MN where he started his dance training at the age of five with the Minnesota Dance Theatre under the direction of Loyce Houlton. His teachers there were Frank Bourman, Eugene Collins from the Ballet Russe de Monte Carlo, and Bonnie Mathis former Principal Dancer with the American Ballet Theatre. At the age of sixteen, he moved to New York City to further his studies in ballet with the legendary ballet teacher Maggie Black. After two years of study with Ms. Black, he was hired by Mikhail Baryshnikov as a member of the corps de ballet with the American Ballet Theatre at the age of eighteen.

While performing with ABT, he was chosen for roles in a wide range of repertory from both choreographers and stagers of classical ballet. He worked with choreographers Agnes de Mille, Twyla Tharp, Natalia Makarova, Frederick Franklin, Glen Tetley, James Kudelka, and Michael Smuin; and the stagers who had the biggest impact on his career were Michael Somes from the Royal Ballet, Patricia Neary and Karin von Aroldingen from the Balanchine Trust, and the Ballet Masters at ABT Terrence S. Orr, Georgina Parkinson, Ross Stretton and Kevin McKenzie, the Artistic Director of ABT.

He was promoted to soloist in his fifth year and went on to dance many major roles with the company including Siegfried in “Swan Lake”, Romeo in “Romeo and Juliet”, Des Grieux in “Manon”, and Solor in “La Bayadere”, dancing with ballerinas, Susan Jaffe, Julie Kent, Nina Ananiashvili, Christine Dunham, Amanda McKerrow, and Cheryl Yeager.

In the fall of 1997, he joined the New York City Ballet as a soloist and was promoted to Principal Dancer the next season. At NYCB he was recognized for his strong technique and partnering skills and performed a large and varied repertory with the company. His favorite roles while at the NYCB were “Diamonds” from the full length “Jewels”, El Capitan in “Stars and Stripes”, “Union Jack”, “Apollo”, “Who Cares?”, “Theme and Variations”, “Piano Concerto #2”, and many others. While there, he had the incredible opportunity of working with Jerome Robbins on several of his ballets, “In Memory Of…”, “Les Noces”, “In the Night”, and the Fall section of “The Four Seasons”.

He performed live in several “Live From Lincoln Center” Broadcasts with both the ABT and NYCB companies. He was chosen by Peter Martins, former Ballet Master in Chief of the NYCB, to play the role of “Ken” in three motion capture “Barbie” movies: Barbie “Nutcracker”, “Swan Lake”, and “The Twelve Dancing Princesses”.

Mr. Askegard performed as a guest artist with the National Ballet of Canada, in James Kudelka’s “Swan Lake”, the Dutch National Ballet dancing with Sofiane Sylve in the “Diamonds” section of George Balanchine’s full length “Jewels”, the Pacific Northwest Ballet in Kent Stowell’s “Swan Lake”, the Bavarian State Opera in “La Bayadere”, the Philippine Ballet Theatre in “Swan Lake” and toured internationally performing the world over.

Mr. Askegard bid farewell to the New York City Ballet in 2011 after fourteen years as a leading dancer. He then co-founded and directed Ballet Next, a company focusing on new choreography and fostering the growth of young artists. In 2013, he began teaching for Ballet Academy East in New York City, and the American Ballet Theatre Summer Intensive in New York. In 2015 he was appointed to the position of Rehearsal Director of the Philadelphia Ballet under the direction of Angel Corella and continues to hold all three of these positions today.